If you haven’t already noticed, we are currently seeing an unprecedented level of mass triggering across all platforms of the establishment.

Australian liberals have taken it upon themselves to join the US establishment’s meltdown by expressing their outrage on twitter and other platforms, as you can read in our previous article.

Possibly Australia’s chief radical leftist moron, Richard Di Natale, has called for Australia to reconsider our alliance with the United States due to the election of Donald Trump as the next President of the United States.

“Many Australians are very, deeply worried. They’re worried because the US has elected someone who is racist, sexist, anti-semitic, he’s nationalist (don’t know why that’s a problem), he denies climate change and promotes nuclear proliferation.”

Apart from the usual racist and sexist name calling that radical leftists use to smear anybody who might favour Donald Trump, it seems Di Natale is not aware of what Australian’s are worried about at all.

First of all, Australians are not worried about climate change.

A study performed by the University of Tasmania published in the Global Environment Change journal showed that nearly 1 in 5 Australians don’t believe in climate change, making Australia the number one country for climate change denial in the world.

Di Natale then went on to condemn One Nation for their support for Trump’s Presidency.

“The only people who are whole-heartedly supportive of his presidency are members on the extreme right like some of those people within one nation, and of course, the extremes within the coalition.”

So are Australian’s ‘deeply worried’ about the nationalist ideas that One Nation stands for like Di Natale said?

We all remember when the greens ‘heroically’ staged a walk out during Pauline Hanson’s maiden speech in the senate. Virtue signalling at it’s finest.

When will leftists learn that walking away from the opinions you disagree with only demonstrates your lack of balls to confront your opponents, and inevitably backfires on you in the long run.

A widely circulated Newspoll poll was conducted which showed that since the election, One Nation’s support had literally quadrupled, whilst Di Natale’s Green Party declined. 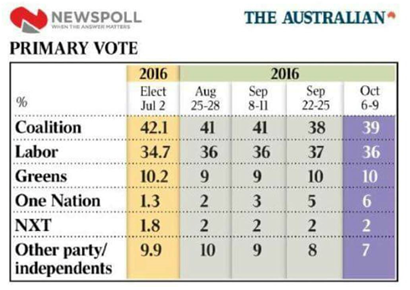 This emphasis on national pride and an Australia first approach that One Nation and the Trump movement both have in common is clearly not worrying the people of Australia, but actually providing a voice for those that have been forgotten by the mainstream political establishment.

Richard Di Natale is a total moron who does not have the slightest clue about what worries everyday Australians.

A political shift is taking place, and Australians are waking up.

7 thoughts on “Richard Di Natale is a MORON!”