Socialist Alternative are nothing more than the modern day Marxist minions who claim to fight for the underprivileged working class of Australia, when none of them have worked a day in their lives.

If you want to become a Social Justice Warrior in Australia, you have to apply through them.

They have factions in every city in Australia and are known for their pathetic, low energy protests yelling good old fashioned commie slogans they rehearsed during Gender studies classes.

Normal people are smart enough not to pay attention to their bogus ideas,  but it’s scary that young privileged Uni students are being attracted to this false ideology based on the teachings of radical socialist philosophers of the past like Engels, Lenin, Trotsky and above all, Karl Marx. All these radicals are known for their flight and plight for the working class against the ruling class, but never actually demonstrated the philosophy they preached in their own lives.

So what are Socialist Alternative fighting for?

So, who is Karl Marx and what is Marxism?

Marxism is essentially communism. Marx wrote the communist manifesto and laid the ideological foundation for communist systems that were to exist all throughout the 20th century.

The concept that Marx based his philosophy on was that all hardship that the working class faced was somehow caused by the ruling class exploiting the working class. In a nutshell, rich people became rich because they stood on poor people to get there.

The cultural Marxism that we see today with Socialist Alternative has expanded to other social and cultural areas and not just the struggle of the working class against the wealthy class. What cultural Marxism does is identifies groups of people as winners and losers, and simply says that the losers are losing because the winners cheated. And because this exercise requires no evidence to prove any of it, it needs very compelling, emotionally driven propaganda to win people over.

If you believe in judging a tree by it’s fruits, it is important that we know how Karl Marx demonstrated and lived the values that he promoted. So let’s take a look at the history of Karl Marx.

Karl Marx claims to understand the flight and plight of the working class, yet never did a hard days work in his life. He applied a for job once in his early life but was rejected because his hand writing was too poor.

Marx was grossly incompetent with money. As a student he racked up massive amounts of debt, and this is said to be the foundation for his emotional vendetta with the Jewish, and the wealthy class. Throughout his life he borrowed money from lenders, friends and family members and almost 100% of the time never paid any of it back.  He preached strongly about the exploitation of small business and the working class, but was a culprit of this exploitation when he refused to pay the bills for the goods he received from local grocers and butchers because he never had the money.

When he was forced to leave his house for not repaying back his loans, he and his family were forced to live in community housing where it is said the family lived in shocking conditions. After a few years he had a very young who child died due to sickness from living in such horribly unhealthy conditions.

Marxism is often associated with causes such as feminism, but Marx was essentially anti-woman in his personal life, not allowing his daughters to pursue the goals of a working career as Marx strongly advocated for in his philosophy.

Marx was by no means a healthy man. He was an alcoholic by most people’s standards, he drank booze every day and almost never drank any water, which is most likely why he had shocking boils, from head to toe, all over his skin for at least 25 years of his life. This is probably the reason why he was such an easily agitated person and had regular outbursts of rage. His health got so bad that he eventually ended up collapsing in a nervous breakdown in the later years of his life.

It is obvious that Marx didn’t uphold any of the trademark principles of his philosophy. It is no wonder that his little minions at Socialist Alternative are incapable of any reasonable debate and resort to disruptive, anti-democratic protest tactics.

In early 2014 on an episode of Q and A, a brigade of social justice warriors from Socialist Alternative made a scene while the show was live causing the entire show to be put on hold, following a series of rude and disruptive question asked by members of Socialist Alternative.

In early 2015, an Aboriginal community gathered in their town to commemorate the 11th anniversary of a young Aboriginal who was killed by police. What started as a peaceful gathering turned in to a stomping ground for Socialist Alternative calling on the Aboriginals to revolt against the evil, black killing cops.

In march last year, Socialist Alternative vandalised and destroyed property at Liberal Senator Corey Bernardi’s office in Adelaide because of his opposition to the Safe Schools program. They filmed it and put it on the internet.

Only a few months ago, transgendered Roz Ward, who was the architect of the Marxist Safe Schools program, was caught assaulting an man because he was wearing a Donald Trump hat. She was caught holding a copy of Red Flag newspaper which is a communist rag run by Socialist Alternative. 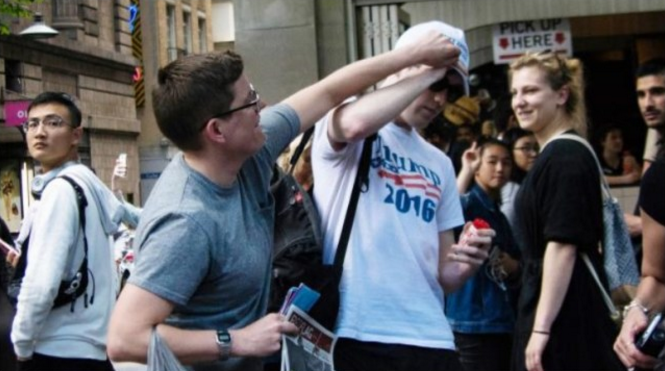 I don’t know for sure but I’m confident they had something to do with the group of losers who disrupted parliament house in Canberra during question time, holding each other’s arms in solidarity, gluing their hands to hand rails, pouring red dye in to the water fountain and abseiling over the front of parliament house.

I have personally tried to talk to the members myself while they campaign and sell their Marxist, Leninist propaganda in Rundle Mall. I get abused, called a racist and ignored for simply trying to have a conversation with them.

In conclusion, Socialist Alternative are a complete and total laughing stock.

They are University bums who have never put in a hard day’s work in their life and wouldn’t know the first thing about the struggles of the working class in this country.

Their fallacious arguments, if they are ever able to construct an argument, do not hold up to the slightest of scrutiny and you will find that right leaning people like myself know more about Marxism than they do.

Their whole philosophy is based on a piece of human garbage who lied about his teachings and made no effort to demonstrate the ideas he preached in his own life.