When the left sends their Muslim advocates, they’re not sending their best. Sam Dastyari made a video where he attempted to do a character assassination of a number of One Nation candidates before the WA election that took place on Saturday and it reeks of total hypocrisy.

We all know that there are those on the left who will do absolutely anything to score victim points to advance themselves through the politically correct hierarchy of victimhood. Before we get in to roasting Sam, let’s take a look at the victim complex.

There are a number of positions in the victim hierarchy, some scoring more points than others, depending on the your performance in the ‘Oppression Olympics’ usually appropriated by the white male. This probably goes without saying but white males do not make the cut. Sorry guys.

Being a woman will give you a good start, due to your continued suffocation by the patriarchy. However, being a white woman could get you in to strife based on your unquestionable, biologically ingrained racism carried down generation to generation through your white blood. So if you’re a woman, try to be a woman of colour. This will score you more points.

Religious minorities are extremely lucrative in the victim complex. Being Jewish should see you at the top of the pyramid due to the whole WW2 Nazi genocide thing and the left’s obsession with calling everyone a Nazi. However, they have recently received a severe demotion because Donald Trump called Israel a close friend and ally of the US. As we all know, Trump is Hitler reincarnated so by default, the Jews must come down the pyramid because we must not agree with any views espoused by Donald Hitler Trump.

Racing ahead at the top of the victim complex is Muslims. Muslims are becoming Voldemort where people are too scared say the word Islam for fear of social justice lynch mobs smearing their names as racist bigots, whilst ruining their careers. It seems a strange relationship that the left has decided to engage in, nonetheless, Muslims are the new guinea pigs for the left to flaunt in the people’s faces as the new and improved leader of the victim hierarchy.

This is where Sam Dastyari has seen an opportunity for political gain.

Despite being born to parents who fled the tyrannical Islamic law of Iran at the age of five, the Iranian born ‘non-practising Muslim’ as he very recently described himself has campaigned for the Muslim community in Australia on Halal certification and other pro-Islamic issues.

During a fiery exchange with Pauline Hanson on QandA, Dastyari, who confidently sat on his high horse lecturing Pauline Hanson about her using ‘politics of fear’ was caught red handed playing the Muslim victim card when questioned about his faith.

Pauline Hanson asked Sam “Are you a Muslim, really? I did not know that”.

Sam Dastyari responded, “Yeah, and I have never hidden it away”.

Never hidden it away hey? Ok, let’s lay out Sam’s consistent record of being a Muslim.

In an article publishing an interview with documentary maker John Safran, Safran spoke about a conversation he had with Sam Dastyari where he said, “Sam says he’s an atheist so religiously he’s not Muslim anymore”.

Dastyari’s lifestyle does not reflect that of a devout Muslim who has ‘never hidden away’ his Islamic faith as he so arrogantly states. On many occasions he has been pictured drinking alcohol which is strictly forbidden under the Islamic faith. 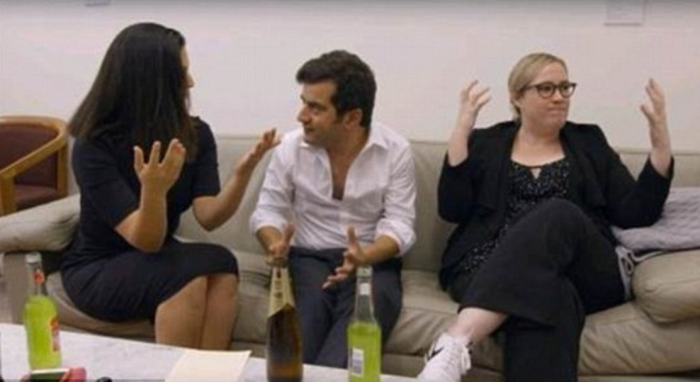 Leading up to the confrontation with Pauline Hanson, Dastyari tweeted “Never been religious (born Muslim). Under the Hanson ban I would never have been able to come to Australia”. 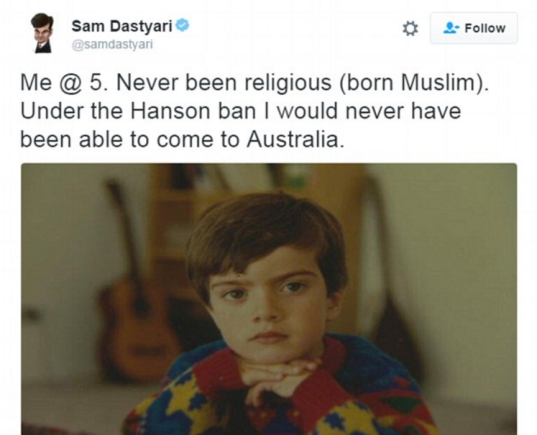 Not only has Dastyari flip-flopped about his religious beliefs, his attack on One Nation candidates’ ability to uphold and demonstrate Australian values and principles stinks to high hell!

This is a man who was forced to resign as a senator in disgrace after having a $40,000 legal bill paid for by a Chinese communist party-linked business. The billionaire chairman of the business donated hundreds of thousands of dollars to both the Labor and Liberal party between 2013-2015, clearly exposing Dastyari as having a cosy relationship with a foreign organisation manipulating our domestic affairs. The extent of Dastyari’s former relationship and what was involved with this organisation is still unknown.

Does this sound like a guy who should be lecturing anyone about upholding the values and principles that Australia needs; a bought and paid for crook who pretends to be a Muslim just to score victim points and gain a political advantage through social justice?

So before you read in to Dastyari’s character assassination attempt of One Nation’s candidates, who did surprisingly well for the small presence they have in Western Australia, just remember the sort of character that is giving you this information.

And next time, tolerant lefties, try and send someone a little better than the likes of the disgraced, bandwagon Muslim that is Sam Dastyari.